100% convinced of the authenticity of the images and quality, upon closer analysis of the Ariel Phenomenon captured, when enlarged and enhanced to their visual capacity reveal astonishing detail and structure to the UFO’s, which vary in shape and colour spectrums, ranging from Disk shaped objects to Cylindrical/Cigar shaped anomalies, plus a few unusual in appearance, certainly not the standard conventional civilian or military aircraft we know and see in our skies today.

Regarding the detailed analysis of the visual manifesting of various races of Extraterrestrial beings are simply some of the best I’ve worked on and seen. In the top 1% of authentic experiencer cases in Ufology to-date. 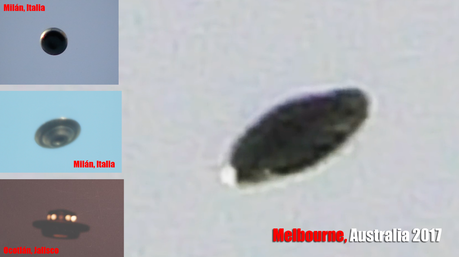 Pete has also been featured in some Investigations / Reports by Mexico's Tercer Milenio TV's Los Vigilantes Del Cielo. Below is one from Dec 17th 2017.

The collaborator of Third Millennium Sky Watcher Peter Slattery managed to photograph and video record an object with great clarity.

In this case it is important to highlight that it is one of the clearest evidences that were recorded during 2017, confirming that the UFO activity was very important during this year, and adds to the clearer images that have been obtained years ago, like the photographs of Raúl Dominguez in the Population of Ocotlán in Jalisco México, a sequence of images that clearly show an object and how it presents windows in its structure, likewise we compare this evidence with the videos of the Sky Watcher Antonio Urzi in Milan Italy who has definitely managed to surprise both locals and strangers due to the clarity of their images ...
Fortunately we have the most important recordings of unidentified flying objects in the world and this allows us to analyze and show the world the results and we can establish that they are very likely to be visited by intelligences alien to our world is a great possibility ...

From Sky Watchers International / Los Vigilantes on Peter Maxwell Slattery's and an-other persons footage, comparing it to one of the recently released bits of footage of a UFO captured by a Military Infrared Camera.

Snapshots from the investigation below. They got to interview witnesses, look at the evidence, and even film some crafts themselves while visiting Pete's home. October 2017

I have run teams of Remote Viewers on projects for the corporate and intelligence worlds for over 20 years as a professional Remote Viewer. Employing the same methodology I use for gathering information professionally, I employ on Pete Slattery, and what he has filmed. In the realm of anomalous film footage, experiences, and knowledge, Pete is one to watch. He is an attractor of both UFO and paranormal phenomena, has some of the best truly anomalous footage I have ever seen, and our remote viewing projects have determined the legitimacy of what he continually experiences and captures. ​