This is just a small compilation of Pete's evidence and experiences

These are a few analysis done by Jason Gleaves with some of the originals below. To see more analysis on Pete's evidence click here.
Click on an image to enlarge

Alien and Craft in Apparition Form

Click on image to enlarge
This is a photo taken by Peter Maxwell Slattery out the front his old place in Lavington, N.S.W Australia, on the 29th of June 2012. Pete has seen a physical Grey turn into this ghost type form before it disappeared during a later experience. Also since he has seen many crafts and Beings appear this way, and even the crafts land on him in this state. On the left is the original photo and to the right is the same photo with an enhancement done with Auto Adjust. In the circle is a face, and inside the square is an enlargement of the face.

Click on image to enlarge
Photo taken by Pete when he saw something phase in and out in front of him.

Click on image to enlarge
Same image as the previous one, top left. The rest are the same ​image with different filters. 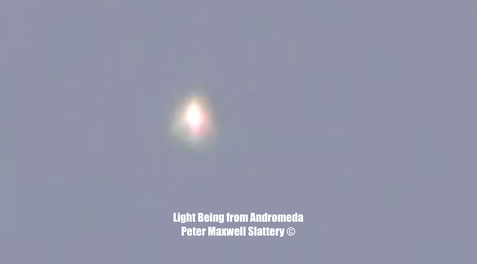 Click on image to enlarge
Image from footage Pete captured of an Andromedan Light Being that was in the sky.

Click on image to enlarge
Photo Pete took (with witness present), of Shi-Ji the Pleiadian, when she and her craft had landed in apparition form in his bedroom.

Sound of a UFO

The noise you are about to hear started a couple of minutes into the footage and this is only a small part of it.

​On it is some orbs that blink in and out in time with the sound. For years Pete has reported a thumping sound that is deep and goes through him when having an experience, or when a craft had landed on him, his home, or location, as this is what happens when the craft lands on people in apparition form, just outside of becoming fully materialised before taking people or having an experience.

​Many experiences report this same sound as well. What you are about to hear is the sound that a UFO makes. The craft that made this sound is an Orion craft.

X-ray fluorescence analysis of soils by a lab in Australia

Short clip of various types of Black Helicopter that Peter Maxwell Slattery has filmed over the years.